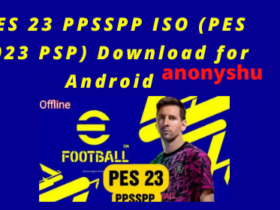 Download PES 22 PPSSPP – PSP ISO, which can be played on Android via PSP emulators. Pro Evolution Soccer 2022 is the most recent installment in Konami’s free game series.

As you scroll down, you will see the game’s specifics, including features, game size, and, finally, the download link and how to install it (video guide/gameplay).

On September 30, 2021, eFootball PES 2022 was officially published. So here is the hacked version, which includes the most recent and up-to-date player moves, such as Messi to PSG, C. Ronaldo to Manchester United, and Lukaku to Chelsea, among others. Tournaments and team uniforms have been updated. The official version now includes all of the most recent features and players.

PES 2022 contains numerous upgrades over the previous version, PES 2021 PPSSPP. For example, the graphics in this version are fantastic. Players can be observed perspiring. Dirt can be observed on player jerseys and other items. It will undoubtedly make this year’s list of the best PPSSPP games.

Please read the game details below before proceeding with the download and installation.

The exact technical details of the eFootball PES 22 ISO game are listed in the table below. The following information contains the recommended system requirements for playing the game on your Android device.

Scroll down and continue on to learn how to install PES 2022 PSP on Android.

This game has improved gameplay, graphics, field texture, player identity, new transfers, high-resolution game videos, new balls, current team kits, and stadiums. According to Konami, they are “staggering enhancements to all sections of the game.”

In summary, below are the Pro Evolution Soccer 2022 features.

PES 2021 ISO has thrilling game modes for every football lover. We’ve gone over some of the game modes here.

Full-time scores for De Bruyne in an exhibition game

In the exhibition mode, you can play against any team you like. It could be a local or national team. Plan your strategies. Configure the game using the options menu. Try to win so you can brag about it. Before proceeding to tournament mode, you can learn a lot from the exhibition matches.

In PES 22, you may establish a custom team, register players, manage club resources, compete in league and championship events, analyze team growth and success, engage in transfer negotiations with other clubs, and earn trophies and other prizes in the master league. This mode is similar to Dream League Soccer.

HOW TO BECOME A LEGEND

In become a legend mode, players can design their own player and pursue a career of growth, success, and experience at the highest levels of club and international soccer.

Existing stars such as Cristiano Ronaldo, Lionel Messi, Kylian Mbappe, Eden Hazard, Neymar Jr, Haaland, or any other superstar can also be used to enjoy the beauty of the game from a single man perspective.

During your career in this mode, you can also sign for other teams, win player and team honors, represent your country in international events, and enhance your game and personal stats.

Nota bene: Become a legend custom players can be signed by master league teams and utilized in real-world games against other clubs or country teams.

TOURNAMENTS There are various competitions under Tournaments that you can enter to gain trophies and other achievements. Checkout!!!

Though the UCL mode is no longer officially supported by Pro Evolution Games, you may still enjoy it in PES 2022 iso because our developers have included it particularly for you.

This is the most prestigious European football championship in which everyone wishes to compete, even as a gamer.

Play in the UCL competition with any European club of your choice, and your team could win the renowned trophy.

The UEFA Champions League’s second-tier competition is the UEL. It is less competitive because the teams’ players are of inferior caliber, which boosts your chances of winning the event.

In World Cup mode, you can select your favorite national team to compete in the world’s largest international football championship. To win the World Cup, you must first qualify from the group stages and then defeat all of your opponents in the knockout stages.

Choose your favorite Premier League club and compete for the EPL trophy.

La Liga is another another intriguing division in which to participate in PES 22. FC Barcelona, Real Madrid, and Atletico Madrid are the best Spanish teams to use. Sevilla is another option.

SERIA A IN ITALIAN

As you compete for the Seria A cup, you can use Juventus, Inter Milan, AC Milan, or Napoli. Compete in various league cups as well as strive to win individual prizes.

PSG is the most powerful team in the Spanish League. Monaco and Lyon are two other strong clubs. You can choose any of them to play for the League 1 championship.

BUNDESLIGA PES 2022 PPSSPP also includes the German Bundesliga, in which top teams like as Bayern Munich, Borussia Dortmund, and RB Leipzig play for the Bundesliga title and individual accolades.

As you test the game in a customizable practice session, the training mode will help you improve your passing, gameplay, penalty taking, corner kicks, and free kick skills.

Now that you’ve learned the basics of the game, let’s move on to the download and installation.

PES 2022 PPSSPP ISO INSTALLATION GUIDE (REGULAR AND PS5 CAMERA)
The quick processes listed below will show you how to install the game.

1. GET THE PPSSPP ANDROID EMULATOR

The first step is to get the most recent PPSSPP Gold Emulator, which will allow you to execute ISO files on your Android device.

ZArchiver Pro is a program that allows you to extract or unzip a game’s zipped folder.

3. GET THE ISO AND GAME DATA FILES AND EXTRACT THEM

Download PES 2022 ISO highly compressed file using the button below and unzip and extract the files with Zarchiver.

After downloading the files, unpack the ISO to your SD card or internal storage’s PSP >> Game folder. After installing the PPSSPP emulator, create a PSP folder, then a subdirectory “Game” if it does not already exist.

4. START THE PPSSPP EMULATOR AND PLAY THE GAME

Launch the PPSSPP Gold emulator on your Android device, then select the Game tab. Select PSP from the list of alternatives. If you unpacked the iso file correctly, you should see PES 22 iso.

To run the game on your phone, tap on the iso.

INSTALLATION AND GAMEPLAY VIDEO FOR PES 2022 ON THE PSP

The video below depicts PES 2022 PPSSPP gameplay on Android.

Here’s how to use ZArchiver Pro to extract the game files.

See the video above for complete instructions on how to install and play PES 2022 ISO PSP on Android without any problems.

NOTE: If you get a “black screen” in PES 22 PSP, simply change the language of your PPSSPP emulator to Espanol. This will correct the error. Here’s how to switch languages.

Navigate to the settings menu.
System of clicks
Choose a language, then scroll down and choose Espanol.
This game will undoubtedly appeal to you. Although PES 23 PPSSPP, the Efootball PES 2023 PSP edition, has more fascinating and updated features that will impress you. A trial will persuade you.